The U.S. Government Accountability Office released a report today finding that two social media campaigns operated by the U.S. Environmental Protection Agency violated federal laws against publicity, propaganda and grassroots lobbying by the agency. The violations occurred as part of USEPA’s efforts to adopt the Clean Water Rule defining the scope of “waters of the United States” under the federal Clean Water Act.

For a more detailed analysis of the report, you can see my article contained in the December 2015 issue of Global Water Intelligence, which will be published later this week.

In the first round of SWIFT financing in 2015, the Board provided funds to just over $1 billion in water projects in Texas, with future commitments for an additional $2.9 billion. The geographic distribution of funds can be seen in the charts below. As is apparent, North Texas was the recipient of the largest share of 2015 funds, while the Houston area was the largest recipient of future commitments and overall funding. The two largest projects were: 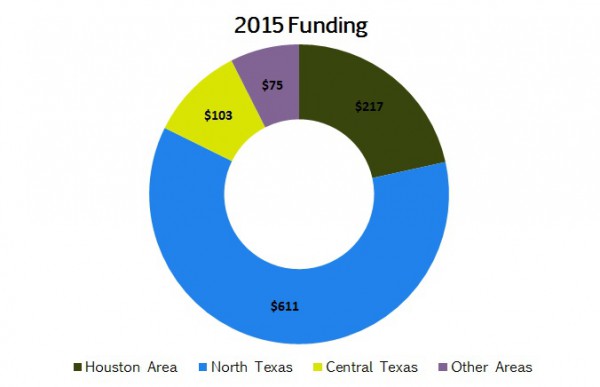 The Arizona Supreme Court has issued an important decision regarding water transfers and who may participate as an “interested party” in administrative proceedings before the Arizona Department of Water Resources (ADWR). The decision was issued on November 12, 2015 in the case of Arizona Department of Water Resources v. McClennen, No. CV-15-0223-SA, which is a dispute between Freeport Minerals Corporation and officials within Mohave County over water on Planet Ranch. That ranch has been the subject of multiple water transfer proposals since the 1980s, and for a time was owned by the City of Scottsdale for that purpose, before it was sold to Freeport in 2008.

ADWR rejected the County’s objections, concluding that Mohave County had no standing to participate in the proceeding since it did not hold any water rights or other interest that is protected under the water transfers statute, found in Arizona Revised Statutes § 45-172. The County appealed that ruling, which led to last week’s decision by the Supreme Court.

The court held that § 45-172 allows ADWR to consider a limited set of factors when determining whether to approve a transfer of surface water rights. The statute requires that the water rights proposed for transfer “shall have been lawfully perfected … and shall not have thereafter been forfeited or abandoned,” and “vested or existing rights to the use of water shall not be affected, infringed upon, nor interfered with” by the transfer. Mohave County did not allege any violation of those standards by the proposed transfer from Planet Ranch, and did not hold any vested water rights itself. Therefore, the court held that the County had not raised any arguments that needed to be considered by ADWR, and the agency did not need to allow the County to participate in the proceeding.

Mohave County argued that a water transfer should be subject to a discretionary public interest test, like that imposed on new appropriations of water. Arizona Revised Statutes § 45-153 allows ADWR to reject a proposed appropriation if the use would be “against the interests and welfare of the public.” The Supreme Court held, however, that the public interest test only applies to new appropriations of water and not to water transfers, since that language appears nowhere in § 45-172. That is consistent with the concept that water rights, once formed, are property rights that can be used or transferred by the owner without ongoing oversight from ADWR, as long as the use does not infringe on the rights of other water users.

The Supreme Court used the factors to be considered by ADWR as the basis for interpreting who may be an “interested person” that can file objections against a water transfer. The term is not defined in the statute, so the court looked to the purpose of objections. The court held that in this context, the phrase “interested person” should mean a person who has an interest protected by § 45-172, i.e., an owner of a vested water right that could be affected by the transfer. Since the County did not fall within that definition, the court ruled that the County had no standing to file an objection, and ADWR was correct in rejecting its participation.

In essence, Mojave County objected to the Planet Ranch water transfer based on the general interest of its citizens, rather than any special interest in the water rights at issue. Water in Arizona is owned and allocated by the state through ADWR, and the Supreme Court denied the attempt by Mohave County to insert itself into that process without a demonstrable interest in water rights. The decision is favorable for water rights holders, since it rejected the argument that ADWR should apply a public interest test to all water transfers. Instead, the Supreme Court affirmed that once an initial appropriation has been made, the resulting water rights constitute legal entitlements that can be freely used and transferred by the owner, in the absence of concrete harm to other water users.

Of course, whether opposing the water transfer would actually be in the interest of Mojave County citizens is debatable, but the political process resulted in County elected officials determining that they should object to the transfer. The Supreme Court’s decision represents a victory of water law over politics, at least temporarily in this matter. Water management often comes down to popular opinions and politics in its most base form, so it is refreshing to see a court applying the law objectively, rather than trying to divine the political currents.

Many of my readers have attended the state-mandated training course for directors of California mutual water companies, which I have conducted annually since passage of Assembly Bill 54 in 2011. Given continued interest in the topic, I will offer the course on two dates this year. Because mutual water companies are spread across the state, making travel to a central location impracticable, the training will be conducted by webinar on the following dates:

The training will be similar to previous years, updated for new developments in 2015. New this year is that the training is free to all directors of a mutual water company. Charges for prior years have covered the cost of the training, so I can now offer the program without charge. Since there is no charge, I hope some directors will attend who have had the required training but could benefit from a refreshed memory and the 2015 updates.

If you are interested in attending the training or learning more, please call Pat Starkie at (512) 236-2231 or email her at pstarkie@jw.com. I can also answer questions below. I look forward to meeting you.

No year has passed since 2011 without the introduction of new legislation aimed at reforming the management and governance of mutual water companies in California. The 2015 legislative session was relatively light, but two laws regarding mutuals were passed and signed by Governor Brown: Assembly Bills 656 (Garcia) and 1077 (Holden).

Assembly Bill 656 allows mutual water companies to participate with public agencies in joint powers agreements (JPAs) for the purpose of insurance and risk pooling. Such JPAs are common among public agencies, and AB 656 will allow mutual water companies to join those organizations and reduce their insurance costs. Insurance may be provided by a JPA through self-insurance, co-insurance under a master policy or insurance purchased from any insurer authorized to transact business in California. (Cal. Govt. Code §§ 990.4, 990.8(a).) Any revenue generated by the JPA must be used to help its members reduce their risk liabilities and further their technical, managerial and financial capacities. A redline comparing the old and new statutes can be found here.

Assembly Bill 1077 modifies the Mutual Water Company Open Meeting Act, which is found at Corporations Code § 14305 and was adopted in 2013 as part of Assembly Bill 240. A redline of its changes to existing law can be found here. Section 1 of the bill includes legislative findings that are generally positive toward mutual water companies, noting that they have made great improvements since 2013 in their service quality, transparency and finances. The Legislature also found that many mutuals have small or no meeting facilities, and are located in remote parts of the state where meetings are difficult for shareholders to access.

In practice, there are very few eligible persons who want to attend mutual water company board meetings. In fact, most mutuals have a difficult time recruiting members to serve on the board and convincing enough persons to attend member meetings to achieve quorum. The only time meeting attendance becomes an issue is when there are eligible persons who disagree with some action taken by the board, and in my experience their disagreement often takes on some degree of anger and interpersonal unpleasantness. In those cases, a board that does not want to be inundated with disgruntled and possibly disruptive members, who wait until the last minute to show up without notice, must have a teleconference set up and ready for all board meetings. Given the small size of most mutuals, very few have existing teleconference services, and this law will impose an additional expense to what the Legislature found were their “limited financial means.”

Although 2015 saw limited legislation aimed directly at mutual water companies, I understand there are plans to make 2016 a more significant year, and mutuals will continue to be affected by the Sustainable Groundwater Management Act of 2014 and the amendments made to that law in 2015. I will post on that topic in the future.