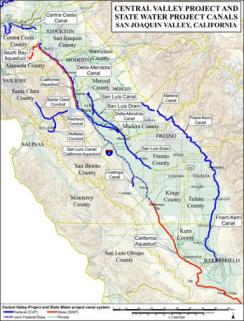 In order to understand the new legislation, it is necessary to know the broader context. The Central Valley Project (CVP) is the largest water development project in the United States and is owned and operated by the Bureau of Reclamation (USBR), part of the United States Department of the Interior (DOI). It includes 20 dams and reservoirs, 11 power generating stations and over 500 miles of canals and pipelines for the development and distribution of water supplies for agricultural irrigation and municipal uses. The CVP largely controls the flows of the Sacramento and San Joaquin Rivers and their tributaries, which together drain a significant portion of California. The amount of water captured and delivered varies annually based on hydrologic conditions and operational constraints, but is approximately 7 million acre-feet (MAF) per year, of which about 5 MAF is delivered for agricultural irrigation purposes.

The CVP was largely constructed between 1937 and the 1970s, and its capacity was increased incrementally with each new component up to its current state of development. Project construction was financed by the federal government, with repayment obligations assumed by the beneficiaries through long-term service contracts. Federal reclamation law provided for interest-free financing and other financial benefits, so that the contractors will not bear the full cost of the CVP and project water supplies will always be subsidized at some level. Congress expressly intended these subsidies in order to gain the broad national benefits of food security and economic stimulus that the CVP provides.

Starting in the 1980s, it became clear that while the CVP had achieved fantastic success in developing water supplies and controlling floods for the benefit of the Central Valley and the United States as a whole, it also was causing the deterioration of the natural environment, including habitat for fish species such as salmon and steelhead trout. Additionally, operation by the USBR was considered by many to be excessively rigid, resulting in the loss of available water supplies during certain conditions. In order to increase the flexibility of CVP operations for the benefit of both project contractors and the environment, Congress passed the Reclamation Projects Authorization and Adjustment Act of 1992, commonly known as the Central Valley Project Improvement Act (CVPIA).

While the shifting of water supplies between CVP contractors was widely discussed as one method of achieving flexibility in project operations, it was not expressly authorized by federal law until the CVPIA. Section 3405(a) of that act provided express authorization for CVP contractors to transfer their water supplies to other users, in accordance with California state law, which had been modified in the 1980s to expressly encourage water transfers as a means of increasing flexibility of the state water management system. Both the CVPIA and state law impose restrictions on water transfers, which have been responsible for largely stifling the water market in California other than a few highly publicized transactions. Water transfers can be accomplished in California, and I have been personally involved in a number of successful transactions for either the seller or buyer, but there are significant transaction costs and delays associated with regulatory approvals and environmental review that decrease the likelihood of transfers being undertaken. As a result, there are many circumstances where water that is not needed in one location cannot be put to use elsewhere in the state because of legal difficulties, for an overall societal loss.

One of the complaints regarding transfer restrictions within the CVP is that the CVPIA limits transfers of contract water to: (1) the average deliveries to the seller over the three years of normal water delivery prior to enactment of the CVPIA (which were 1986, 1987 and 1989) in Section 3405(a)(1)(A); and (2) the amount of water that would have been consumptively used during the year or years of the transfer in Section 3405(a)(1)(I). While both of these restrictions are part of state law for the protection of third-party water rights holders under the No Injury Rule, critics argue that they do not make sense within the CVP, which is a single project operating under integrated water rights. They would argue that the restriction is like imposing a tax on an individual shifting money from one back account to another. Imagine if you had to pay income tax on money that you shifted from your checking account to a savings account, or vice versa! Similarly, those sections of the CVPIA require a transfer to take a “haircut” even when the water is shifted from one CVP contractor to another within the project.

This limited problem is the first part of what Sen. Feinstein’s language addresses. Section 207(a) of Division B, Title II of H.R. 2055 (found on page 81) provides in its entirety that:

Subject to compliance with all applicable Federal and State laws, a transfer of irrigation water among Central Valley Project contractors, from the Friant, San Felipe, West San Joaquin, and Delta divisions, and a transfer from a long-term Friant Division water service or repayment contractor to a temporary or prior temporary service contractors within the place of use in existence on the date of the transfer, as identified in the Bureau of Reclamation water rights permits for the Friant Division, shall be considered to meet the conditions described in subparagraphs (A) and (I) of section 3405(a)(1) of the Reclamation Projects Authorization and Adjustment Act of 1992 (Public Law 102-575; 106 Stat. 4709).

This language is noteworthy not only for what it does, but for what it does not do. For example, Ms. Schifferle criticizes the measure as allowing a small group of landowners to make significant profits from selling water, and specifically calls out Westlands Water District and Stewart Resnick. Her concerns are misplaced, as Section 207(a) only removes restrictions on transfers of irrigation water within the CVP. That inherently limits both the market and the price for water supplies. It does not remove any restrictions currently in place on transfers outside the CVP or for municipal purposes. Transfers between agricultural users within the CVP do not command high prices, and would only be expected on a short-term basis to improve flexibility of CVP operations. The transfers that Ms. Schifferle cites in her parade of horribles would not be affected by Section 207(a). For example, contrary to Ms. Schifferle’s suggestion, the 2009 transfer from Paramount Farms that has become a favorite target of the Progressive Left was not of CVP water, but of water rights formed under state law without any federal or state subsidy. In addition, the holders of most CVP water contracts that would be either sellers or buyers are public agencies, subject to state laws regarding open, transparent public decision-making. This includes Westlands Water District, which is generally not a seller, but a buyer in the water markets.

The second problem addressed by Sen. Feinstein’s legislation is that of costs and delays that are imposed on transfers, particularly for the most common transfers that are only in effect for one irrigation season from April through October. The cost and time consumed in seeking regulatory approvals and environmental review often leads to parties not trying to consummate a transfer that would increase water availability and promote system efficiencies. In the drought year of 2009, this led the California Department of Water Resources (DWR) to coordinate a one-year Drought Water Bank to streamline the process. That effort was followed by a joint USBR-DWR program in effect for the two years of 2010 and 2011. Currently, the USBR is pursuing environmental review for a 10-year transfer program within the CVP, and Sen. Feinstein’s legislation simply encourages that effort (which has stalled), without changing any federal or state substantive restrictions on transfers. Section 207(b) states that:

The Secretary of the Interior, acting through the Director of the United States Fish and Wildlife Service and the Commissioner of the Bureau of Reclamation shall initiate and complete, on the most expedited basis practicable, programmatic environmental compliance so as to facilitate voluntary water transfers within the Central Valley Project, consistent with all applicable Federal and State law.

In addition, Section 207(c) requires USBR to make a report to Congress once every four years about the status of efforts to facilitate and improve water transfers within the CVP.

In all, Sen. Feinstein’s legislation provides a very small, incremental improvement in the way that water transfers are handled within the CVP. It does not fundamentally change any of the existing federal and state laws that have restricted water markets in California, and certainly does not facilitate any private party making untoward profits by selling water in a manner that harms the public. Any resulting transactions will be between willing sellers and buyers, with generally positive effects for the CVP, California and United States as a whole. Negative externalities, including environmental protection, are well prevented by existing federal and state laws.

If anything, federal and state laws should be modified to incrementally reduce the transaction costs and barriers for transfers, so that the waters of the state may be put to the greatest, and most valuable, uses possible, including environmental resource protection and enhancement. Many environmental organizations, such as the Natural Resources Defense Council, Environmental Defense and The Nature Conservancy, recognize the value of water transfers and markets for improving water management. As we enter a new era of seeking true environmental and economic sustainability for the next century, water transfers will need to play a critical role in reallocating water from lower to higher value uses, while providing funding for water conservation improvements and economic enrichment of areas of origin.