In my occasional series of posts including public signs about water, here are a few from the Westlands Water District area in the Central Valley of California. The past several years, Westlands has received a relatively small proportion of water under its contracts with the U.S. Bureau of Reclamation due to dry conditions in the Sacramento River watershed and regulatory restrictions on diversions based on protection of salmon, steelhead and delta smelt fisheries. As is obvious from the photos, farmers and residents in Westlands are not happy about some of those decisions. 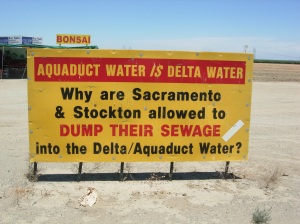 In case you are not aware, Jim Costa and Dennis Cardoza are Democratic U.S. Congressmen from the Central Valley, and some think they have been complicit in the water restrictions. And in case you wonder why the critics rage, see the next aerial photo of part of Westlands Water District, taken today. The green acreage has been planted, and the brown is fallow, largely because of lack of water. 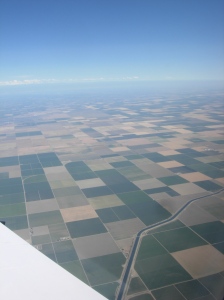